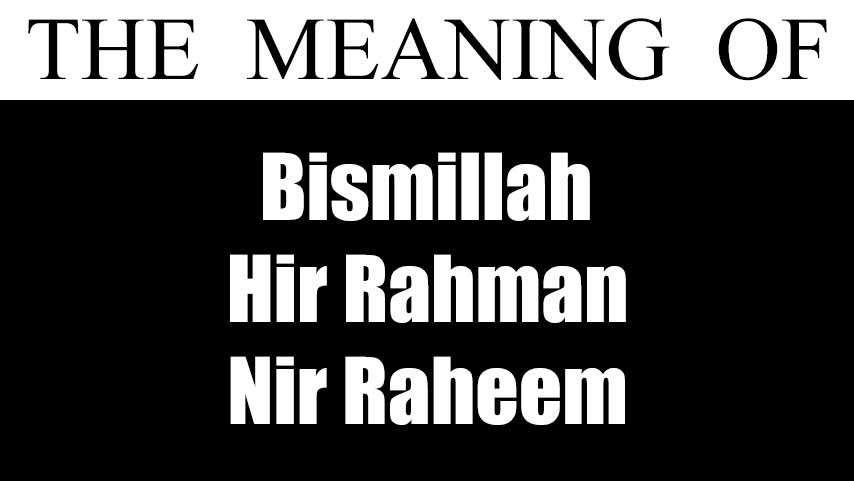 What is the meaning of the phrase Bismillah Hir Rahman Nir Rahim?

The meaning of this Islamic phrase is, “In the name of Allah, The Most Gracious and The Most Merciful“. It’s recited by Muslims daily for many different occasions. The most common place you’d hear Bismillah Hir Rahman Nir Rahim being recited is before reading the Holy Book (Quran). It’s also said during obligatory prayers (salat) before Surah Fatiha but it is Sunnah that this be recited silently in the reader’s head.

The only chapter of the Qur’an is Surah Tawbah which does not begin with this phrase. You would likely see bismillah calligraphy version while reading Quran.

Bism = meaning ‘with’, ‘by’, or ‘name’.
ilah = Arabic word meaning “God”.
Ar Rahmaan and Ar Raheem are two of the 99 names of Allah which refer to Allah’s attribute of being kind, gentle, and merciful.

Putting this together, you can come up with the translation “By the name of God (Allah), the all-Merciful, the especially-Merciful”.

There are many hadiths which stress the virtues and benefits to the one who remembers to say Bismillah.

Narrated Umm Kulthum: From ‘Aishah that the Messenger of Allah (ﷺ) said:

Reciting Bismillah Before Entering Your House:

Jabir (May Allah be pleased with him) reported:

Generally, Muslims should begin by saying this phrase before starting any task or chore. By doing so you’re basically saying, “I start this action in the name of Allah”.

This is definitely an encouraged act and a good habit to begin saying in your life. Life can get busy and we’re all guilty of not remembering Allah (swt) as much as we should. If you’re reading this it means you’re privileged to have a technological device (likely more advanced than you need it to be), a high-speed internet connection, the ability to read, comprehend, and to focus. These are all gifts we take for granted.

Simply by beginning the process to be conscious and deliberate in saying bismillah will make you self aware of your actions which can be a good moral compass preventing you from doing wrong in the future.

There’s no grief-stricken individual who says ‘bismillahir-rahmanir-rahim’ three times while looking up to the sky, where in return Allah eliminates his grief, if He wills.

Bismillah used in a sentence:

We explored Facebook and Twitter news feeds of Muslims to compiled a list of different ways one could use the phrase bismillah in a regular context.

Example #2:
Bismillah ar-Rahman ar-Rahim, La ilaha ill Allah Muhammadun Rasool Allah… We live in submission, but there is no guarantee we will die in SUBMISSION (said before shahada)

Example #4:
Bismillah’hir Rahman’nir Raheem. Remember that this night can be our last night so don’t forget to praise Allah Tabara’kah Ta’ala Rahman as much as you can and be in Sujood and ask Allah Al Janna’ah In Sha Allah. Will u then misguide yourself and invest time with TV and Movies (here Dr. Abdul Jabbar Al Ahmed begins his message with the name of Allah).

Example #5:
Bismillah hir-rahman nir-raheem.
In the Name of Allah, the Most Blessed, the Most Merciful.
Congratulations on choosing… (begin with the name of Allah and then continued on with their message).