What is the Fifth Kalima Astaghfar in Arabic With English Translation 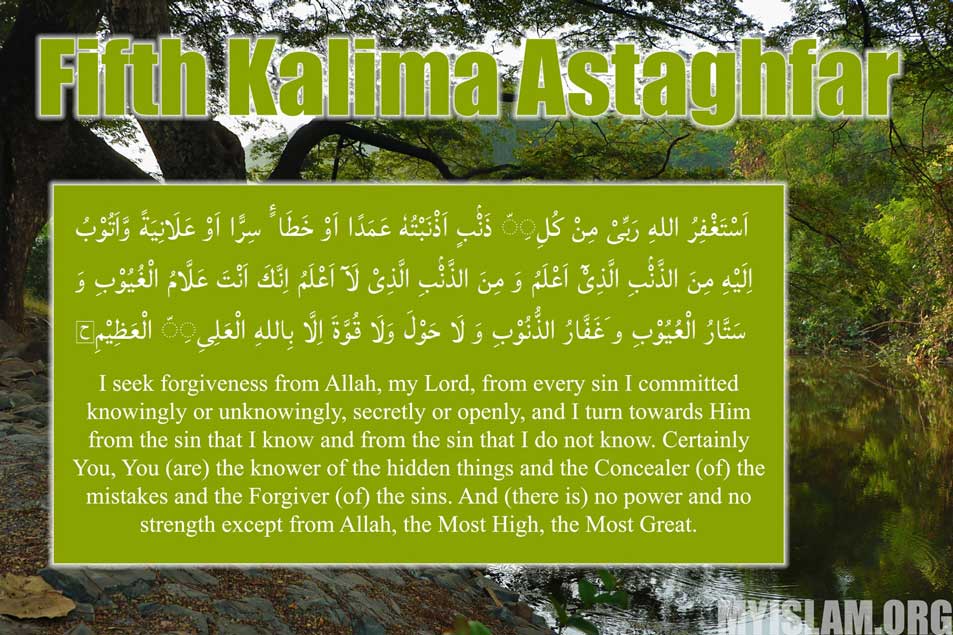 What is the importance of the fifth Kalima (astaghfar)?

Forgiveness brings the person who truly feels bad about what they have done peace of mind. The benefits of this are extraordinary, a conscious and deliberate apology which comes from the heart relieves the burden a person feels.

This in turn can set you free from the past and enable you to have a strong, functioning, healthy body and mind for the future. Stress, anxiety, and regrets are silent killers which take their toll slowly but accumulate through time. We need to become aware of the things we have done wrong and sincerely repent to relieve ourselves of the past.

The past should viewed as a teacher, we should derive lessons from It. For some, it may a tough school, so don’t beat yourself over it but do learn from it.

The Quran repeatedly tells the believers to seek repentance and the rewards of doing so.

“Ask Forgiveness of your Lord and then repent to Him. He will send [rain from] the sky upon you in showers and Increase you in strength [added] to your strength.”
Quran 11:52

“And [saying], ‘Seek Forgiveness of your Lord and repent to Him, [and] He Will Let you enjoy a good provision.”
Quran 11:3

“And say, ‘Relieve us of our burdens.’ We will [then] forgive your sins for you, and We will Increase the doers of good [in goodness and reward].”
Quran 2:58

The Fifth Kalima should be learned to supplicate to Allah and ask for his forgiveness.

Let’s jump in and learn what the actually dua is…

In Arabic, the fifth kalima is read:

The English Translation of Kalima Astaghfar

The meaning of this supplication is,

“I seek forgiveness from Allah, my Lord, from every sin I committed knowingly or unknowingly, secretly or openly, and I turn towards Him from the sin that I know and from the sin that I do not know. Certainly You, You (are) the knower of the hidden things and the Concealer (of) the mistakes and the Forgiver (of) the sins. And (there is) no power and no strength except from Allah, the Most High, the Most Great.”

In Sunan Abi Dawud hadith 1516 which was classified as Saheeh by Al-Albani it emphasizes the importance of asking for Allah’s forgiveness repeatedly.

The Prophet in a meet was recorded to  We counted that the Messenger of Allah (ﷺ) would say a hundred times during a meeting: “My Lord, forgive me and pardon me; Thou art the Pardoning and forgiving One”.

The Prophet, the man who Jannah is guaranteed would ask for Allah’s repentance hundred times while in a meeting. This same message was repeated in Sahih Muslim 2702 a.

Al-Agharr al-Muzani, who was one amongst the Companions (of the Holy Prophet) reported that Allah’s Messenger (ﷺ) said: There is (at times) some sort of shade upon my heart, and I seek forgiveness from Allah a hundred times a day.

Reciting the fifth kalima is a great supplication for those seeking forgiveness. But simply reciting duas is not the only way to be forgiven. Allah subhanahu wa ta’ala wants for us to do good and succeed.

In another Sahih hadith Al-Adab Al Mufrad 380, it was reported that the Prophet, may Allah bless him and grant him peace, said, “Show mercy and you will be shown mercy. Forgive and Allah will forgive you. Woe to the vessels that catch words (i.e. the ears). Woe to those who persist and consciously continue in what they are doing.”

It’s a simple formula, do good, be good and you will reap good.

Show mercy, and you will receive mercy.

Show respect to others, you will be respected.

Be loving towards others, others will be loving to you.