What is Fourth Kalma Tauheed in Arabic with English translation? 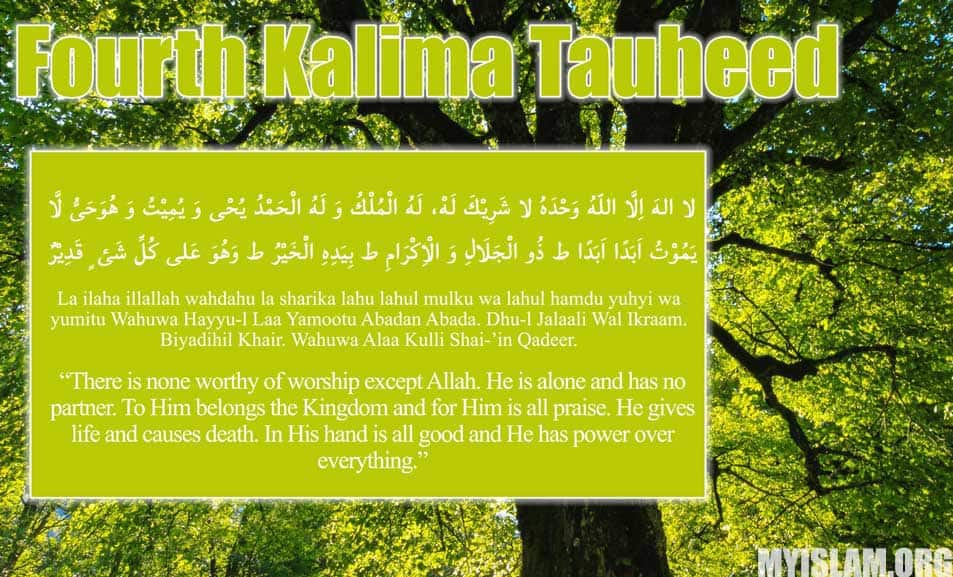 What is the importance of the fourth Kalima (tauheed)?

The fourth kalima is also referred to as Tauheed or Tawheed meaning ‘unification of oneness of God’. This is the first pillar which is the central doctrine in Islam. It holds that Allah is One (Al-Ahad) and Single (Al-Wahid).

In the Qur’an one of the worse sins you can commit is shirk, which refers to associating partners or to accept other divinities alongside Allah. Shirk is a serious sin and according to Qur’an is unforgivable.

In the Quran, Surah Ikhlas describes the Oneness of Allah and is a good introduction to learning about Tauheed:

Now that we have covered the importance of the fourth Kalima, let’s move onto actually learning what it is.

In Arabic, the fourth kalima is read:

The English Translation of Kalima Shahadat

The meaning of this supplication is,

Benefit Based on Hadith:

First, the six kalimas are not found anywhere altogether either in Quran or Hadith. They are authentic forms of dhikr (prayers) which can be offered and their purpose seems to be educational, especially for children or new Muslims as they are a good foundation to learning about Islam.

There are many different hadiths which mentions parts of the fourth kalima and their significance.

In the Sahih hadith 1340 of Sunan an-Nasai (Darussalam), It was narrated that Abu Az-Zubair said: “Abdullah bin Az-Zubair used to recite the tahlil following every prayer, saying:

Although not eactly the same dhikr, we can see the similarity. The importance is that the Prophet (ﷺ) used to make an effort after every prayer to remember Allah by reciting tahlil (saying la ilaha illa llah = there is no deity but Allah) and the fourth kalima accomplishes that.

In Sahih Muslim 2691, Abu Huraira reported Allah’s Messenger (ﷺ) as saying: He who uttered these words:”

There is no god but Allah, the One, having no partner with Him. Sovereignty belongs to Him and all the praise is due to Him, and He is Potent over everything” one hundred times every day there is a reward of emancipating ten slaves for him, and there are recorded hundred virtues to his credit, and hundred vices are blotted out from his scroll, and that is a safeguard for him against the Satan on that day till evening and no one brings anything more excellent than this, except one who has done more than this (who utters these words more than one hundred times and does more good acts) and he who utters:” Hallowed be Allah, and all praise is due to Him,” one hundred times a day, his sins are obliterated even if they are equal to the extent of the foam of the ocean.

According to this hadith, those who recite La ilaha illallahu, wahdahu la sharika lahu, lahul-mulku wa lahul-hamdu, wa Huwa ala kulli sha’in Qadir 100 times in a day would be rewarded as if they freed 10 slaves, would receive 100 credit and 100 sins will be forgiven.

In the Quran there’s an ayah (5:6) which says “Allah does not intend to make difficulty for you”, just the simple recitation of this phrase one hundred times and you will be the receiver of an extensive reward.

Subhanllah, this is the rahma (mercy) of Allah.